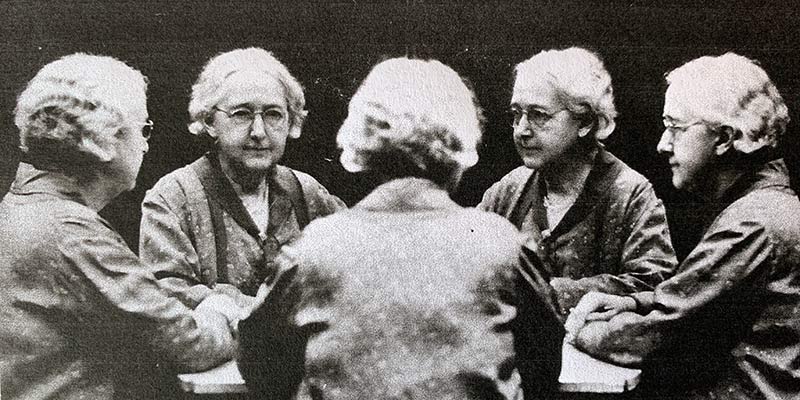 Aunt Elizabeth (Elizabeth Balch-Holmes) gazing in a five-way mirror on the Boardwalk in Atlantic City, New Jersey, three years before her death in July 1937 at the age of sixty-seven. 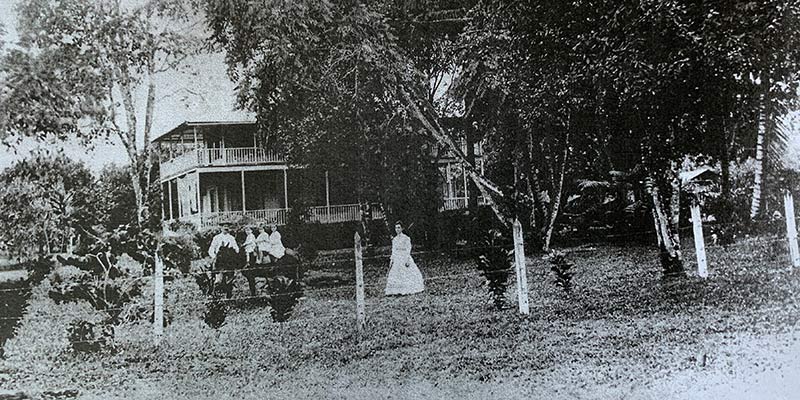 This sketch of my Aunt Elizabeth (my Mother’s sister) has not been written as a eulogy to honor her memory, but rather to acquaint my children with a truly remarkable woman to whom their mother owes much. My Aunt had her peculiarities, many of which, after the passage of years, appear as attributes. She was independent almost to an extreme, acquiring her advanced education largely by her own efforts. She lived during a period in our country’s history when women did not have the right to vote and were generally treated as second-class citizens. In the 1890’s and early 1900’s when the Suffragette movement was in full swing, she proudly marched in Suffragette parades and encouraged other women with less advanced ideas to become active in the movement for women’s rights. She had little regard for the “clinging vines” of the Gay Nineties and so encouraged my sister and me to plan to make our own way in what she referred to as a “man’s world.”

Although she was small and quite frail, as children my sister, brother and I were afraid of her. This was due partly to her severe-looking clothes and plain hair style, but mainly due to the fact that, as she had been able to obtain a medical degree, my mother relied on her to handle our medical needs (even including operations for the removal of tonsils and adenoids). As a result we associated her appearance at our home with vile-tasting medicines and painful treatments.

When she was a small child my Aunt had lost much of her hearing due to complications following an attack of scarlet fever. As she grew older the condition became progressively worse. By always sitting in the front row of her classrooms, and later with the help of a hearing aid, she was enabled to graduate from Wellesley College and from the Women’s Medical College of the State of New York. In those days hearing devices were not the unobtrusive objects of today. Large round earpieces joined to a metal headset were placed over the ears. Cords running from the headset were then plugged into a battery about four by two and a half inches in size. My Aunt had to have pockets added to the front of each of her dresses to hold the heavy battery. With all this highly visible paraphernalia there could be not doubt in anyone’s mind that the person to whom one was speaking was hard-of-hearing.

Her first position in the medical field was as the Woman Doctor in a State institution on Long Island. Later she took a similar position in another institution in upstate New York. She was compassionate and caring in her treatment of all her charges and had little respect for those who, in her opinion, neglected theirs. She felt she must do as well or better than the male doctors.

Probably because of her strong views and independent nature, she became very opinionated. She had little patience with those who refused to help themselves and who abused their bodies with alcohol, tobacco, and drugs. She was a very strong believer in the faith of the Unitarian Church and in right living in general. She brooked no opposition to her views. Having had to use a hearing aid for much of her life, she had a handy weapon to protect herself from being forced to listen to opposing views—she simply turned off the connection to the battery of her hearing devices.

She acquired few personal possessions during her lifetime but gave generously to others. I treasure the few possessions she left me in her Will, among them her antique French mantle clock of which she was very proud, and a ten volume set of “Crowned Masterpieces of Literature,” samples of which she had pedaled around the neighborhood, tucked in the basket of her bicycle, to help pay for her college expenses. Although she herself never cared for it, I also treasure the large oil portrait of her which she had contracted for only to help an aged artist who was having financial difficulties and who, she knew, would not have accepted the money otherwise. Most of all I treasure the memory of her love and of her many kindnesses.

As I look back on her life, my admiration and respect for her increases. A completely unselfish person, she gave generously of her talents and means to help others. Members of her family relied on her to carry them through their difficulties, physical and financial. For many years she shared her small apartment with me. Her generosity enabled my sister and me to achieve college educations.

She had a good sense of humor and could laugh at herself. It seems only yesterday that I saw her with her crown of white hair chuckling over something that pleased or amused her. At the time of her death she was only sixty-seven. As far as those who knew her and loved her are concerned, she can never be replaced.

An appropriate was to conclude this brief sketch might be to quote from an ancient Egyptian saying:

“To speak of the Dead is to make them live again.”

She would have liked that.