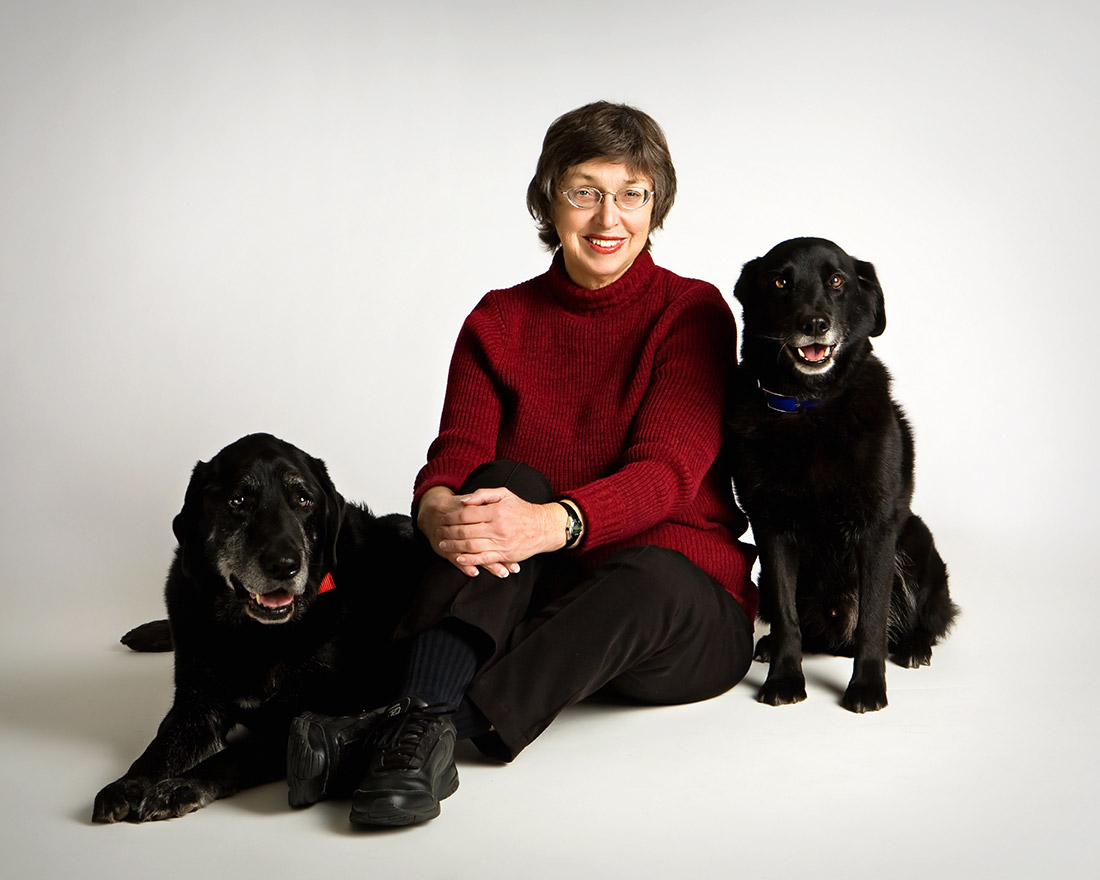 Patricia Wheeler has had four dogs that have worked as therapy dogs. She has been a therapy dog handler since November 2002. She has over 4,000 hours as a therapy dog handler. Her black Lab, Lawrence, the Livermore Lab, had about 2,000 hours of service before passing away of cancer on December 21, 2013. Lawrence was one of six therapy dogs nationwide recognized by the AKC Humane Fund Award for Canine Excellence in 2012. Albert was rescued off the street in Livermore and was a therapy dog from May 2005 until he passed away on January 4, 2014. He had about 1,400 hours of service. We think he was a black Lab/border collie mix. In July 2013, Pat obtained Maddie, a black Lab, from a local breeder. She has over 1,000 hours working as a therapy dog. She adopted Wylie in October 2014 from Tony LaRussa’s Animal Rescue Foundation. Wylie has worked over 500 hours so far. All four of her dogs have received the AKC Canine Good Citizen award and earned the AKC Therapy Dogs Distinguished title. Pat and her dogs are certified by the Alliance of Therapy Dogs (ATD), formerly Therapy Dogs, Inc., which is headquartered in Cheyenne, WY. Pat is also a Tester/Observer for ATD. She has tested/observed about 200 potential teams in the San Francisco Bay Area and coordinates therapy dogs for several sites and events.

Her dogs have worked at numerous places over the years including nursing homes, rehab centers, Alzheimer’s facilities, assisted living homes, welcome home celebrations for troops, schools and colleges, a shelter for homeless and battered women and children, a program for adults with mental health/developmental challenges, a camp for children with life-threatening and chronic illnesses, and more. They have served infants through centenarians.

Pat was astounded by the impact her dogs have had and the life-changing differences they were making for people. She started collecting stories and testimonials in 2005, and this led to a book about the work of her dogs and over 50 other therapy dogs, Successful Tails: The Wonders of Therapy Dogs (2012). She published a second book in 2019, Therapy Dogs in Action: Their Stories of Service and Love. It is a collection of over 80 heart-warming stories as told from the dogs’ points of view about their experiences working as therapy dogs with lessons for the readers. It also includes 30 testimonials from people who have seen the dogs at work.

Although dogs are a major part of Pat’s life, she is also an active amateur musician. She has played in three local concert bands—Danville Community Band, Ohlone Community Band, and San Ramon Symphonic Band, She also plays with Flute Fest, a local flute choir. She is member of the Association of Concert Bands. Each summer, she plays with the Nevada County (CA) Invitational Concert Band. From 2007 to 2015, she was the Band Coordinator for the annual, two-day Golden Gate Park Band Festival in San Francisco.

Through two local Phi Delta Kappa (PDK) chapters (CSU-East Bay Diablo and Berkeley chapters), Pat continues to network with educators and participate in educational service projects. She is also a member of the Josefa Higuera Chapter of the National Society of the Daughters of the American Revolution. She has been a volunteer with the Department of Veterans Affairs Palo Alto Health Care System Livermore Division since 1987.

Patricia Wheeler completed her Bachelors in Psychology and Masters in Counseling at the University of Rochester (NY). She completed her MBA in Management at Armstrong College in Berkeley and her PhD in Education/Policy Analysis at UC Berkeley.

She has lived in Livermore, California, since 1969. She worked for almost 25 years at Educational Testing Service (ETS), evaluating programs and doing research. Pat has two sons and four grandchildren. When time permits, she enjoys traveling. She has been to about 50 countries and all but one continent (Australia).